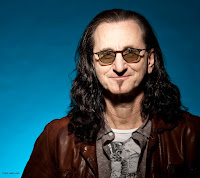 This morning on the way to work, I got stuck behind a woman in a white pickup truck. She kept putting on her brakes. At first, I assumed that it was because someone in front of her was doing the same. Then I noticed that there was nobody right in front of her. When we finally passed the semi in the right lane, so I could go around her, I was reminded of Geddy Lee of the band Rush.

I know what you’re thinking; “this dude has attention deficit disorder and needs to see someone.” Hear me out. As you may have guessed, she was on the phone. It seems that every time she laughed, she put her foot on the brake. Some people shouldn’t be allowed to talk on the phone and drive. Hell, some people shouldn’t be allowed to chew gum and drive at the same time.

So what does this have to do with Geddy Lee? I am a big fan of the band Rush. Never have three guys made so much noise. I always assumed that it was all studio magic until I went to see them. The first time I saw Geddy singing, playing the keyboard and playing the bass line with his feet, I was blown away. These were not simple parts, each part was reasonably complex and not rhythmically parallel. Being a bass player myself, I can tell you that it is hard to sing and play at the same time even if everything is parallel, let alone do three things.

What makes this ability so remarkable is that scientists now believe that we are incapable of multitasking. The best the brain can do is what is called timeslicing. In computer terms, this is called single threaded. Each thread in a computer represents a separate stream of parallel processing. Human’s don’t have multiple threads, so they must switch tasks. Guys like Geddy Lee have learned to switch tasks very rapidly while allowing pure muscle memory to keep them afloat while their brain is occupied elsewhere.

Geddy is great at doing this. The woman in the white pickup? Not so much. There are exercises that can help you improve this ability (like singing and playing an instrument), but I don’t think she practices. Some people may just have a natural ability to do very fine timeslicing. They should be allowed to drive and talk on the phone.

I would like to see states adopt a practice of offering endorsements for driving while on the phone. People would need to take a road test to prove that they are capable of navigating and responding to unexpected situations while being distracted by the phone. If they can, they get a special license plate. If not, they get the regular plate.

This would make it easy for law enforcement folks to identify people that don’t belong on the phone while driving. The penalties for this should be right up there with DUI as it can be just as deadly. The only affordance I would make is that I would allow them to talk on the phone while they’re picking up trash along the freeway. It’s good practice and a lot safer than doing it while driving.
Posted by Tom Bellinson at 8:26 AM