AI is Coming to Take Our Democracy

The warning is clear, the answer maybe less so. Here's what I would recommend: pick your candidates based exclusively on what you see and hear them say. When words come out of their mouths, they may be influenced by software algorithms, but at least you are getting an unvarnished view into what that candidate chooses to project at the time.

We can no longer trust the spin and byproducts of political campaigns. This will require us to think and use our own judgement about what we believe to be the right path. Too much is at stake, so we should each reflect on what outcomes we would like to see for each issue we face as a society and listen to candidates to see if the outcomes they're proposing align with your own.

Is this more work? Yes, democracy is a responsibility as much as a right. We only get out as much as we're willing to put in. If we put in little to nothing, we'll get the candidate that the Russians and other powerful forces pick for us. I say let's do the work!
Posted by Tom Bellinson at 11:23 AM No comments: 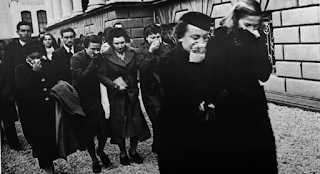 The fact is, whether you are a gun lover, a gun hater, or a gun I-don't-give-a-shitter, guns are part of the fabric of this country. We were founded on the principle that people should have the means to rise up and suppress a tyrannical government, and at the moment, those means are guns.

So, let's talk about the real issue here. People. Most of us will go through life and never kill one person, let alone a bunch of people. We're talking about a very small minority of folks who will actually end up killing anyone, even by mistake.

Given the cost and contention around collecting up all the guns, why don't we focus on what makes someone shoot up a store? I read a lot of psychology books because I'm fascinated by the human mind. It is capable of such beauty and terrible ugliness.

Here's a quiz. You are more likely to shoot up a store if you are:

A) Joyous, full of love, contented, and fulfilled
B) Angry, hateful, depressed and scared

I think even the shooters would get this one right. We should all be asking ourselves how we can help people who are described by B.

Parents have two basic jobs: 1) love their children unconditionally, and 2) get them to adulthood with their self-esteem intact. It turns out that this is harder to do than one might think. There's no means test to determine if a parent can pull this off. Rich or poor, it doesn't matter because if your parents failed in their task, there's a better chance that you'll fail too.

Having made it to adulthood while enduring failed parents, even those who want to be an example of category A, have a rough climb ahead. They won't make the climb without help. And, for those who don't realize that they're in category B, I don't believe there's much hope to save them.


What We All Can Do

Call me a skeptic but as a former category B-er, I can speak to how much work it takes to climb out of that hole. We each see the world the way we've been trained to see it. Let's say that you're angry. You go to the store and the checkout person makes a mistake. She's human. We all do it. But, you're angry already, so you let her have it. Maybe her mistake was caused because she's already having a bad day and now you've blasted her. So, she gives you a piece of her mind. You think "what a bitch!" Your world view has just been reinforced.

Now, if you had the presence of mind to take a breath and say something like "I can see that you're pretty stressed out today. Don't worry about it," this would have most likely diffused the situation and garnered you an apology. Your world view has just been reinforced.

Same situation. Very different outcome. The difference is empathy and civility. The great thing is that you don't actually need empathy to be civil. Have you ever watched one of those old movies from the 1950's? They seem so fake to us today. People were so nice all the time. The world wasn't really like that was it? Yes. It was.

Once upon a time, children were taught to respect their elders (even if they didn't deserve it). They were told to ALWAYS say please and thank you. These little lessons caused children to grow up and treat others with a bit of kindness even when they didn't know why or maybe didn't even really want to. It was just expected. In the sixties, the hippies gave us free love, free speech, free expression, and ultimately a major erosion of civility. By the 70's, people had to earn their civility, so if they were having a bad day (as most days are to category B folks), they just may not get any.

All these little encounters pile up to cause a person who already thinks very little of themselves to think even less over those around them. When life becomes devalued, taking a bunch of it "don't mean much." This is where we are now. So, next time you encounter someone who is seemingly having a bad day, be nice. Try to help them have a better one. If all the category A folks do this, we can gradually shrink the number of category B-ers who want us all dead.
Posted by Tom Bellinson at 3:58 PM No comments: