Lip Balm is For the Bees 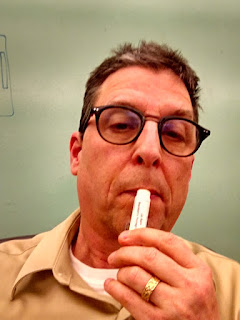 When we got into the soap business, we thought we should have a few other products as well. Having started the business in late fall in Michigan, moisturizing was already on our minds. The air gets pretty dry in the winter months around here. So, we opted to make some body lotion and lip balm.

Our goal was to make better products that don't have a ton of chemicals in them. I will confess here and now that I am a longstanding Burt's Bees lip balm user. Back when lip balm was called Chapstick®, that's what I called it and that was the brand I used. When I discovered Burt's Bees, I came to realize that Chapstick® is made from petroleum. That's what some of us call a fossil fuel when its other derivatives find their way into the tank of our car.

Burt's is made with real bee's wax. It smells better, it feels better. And, it's ingredient list is a bit shorter. Frankly, when we set out to make lip balm, we didn't think we could beat it. There was one thing I did like about that petroleum product: it wasn't so hard. The hardness thing is particularly a drag in the winter when I most need it because it gets so hard that I practically risk chipping a tooth putting it on.

Enter Ti LeBlanc lip balm. The secret? Just the right amount of coconut oil. It makes the lip balm softer and creamier. I can pull an ice cold tube out of my jacket pocket and it goes on just like butter! Sometimes less is better. We only have three ingredients.

I know what you're thinking. "This dude is just going on about his damn lip balm because he's trying to sell it." Well...yeah, I'd like to sell some lip balm. Can you blame me? That doesn't mean it's not as good as I say it is.

Don't worry, I'm not going to keep going on about lip balm. Here's what I'm going to say. Go to the Ti LeBlanc Website and spend $24 on other products and we'll throw in the lip balm. It'll have to be peppermint because I can't figure out how to make our discount system allow you to pick your flavor, but if you really hate peppermint, put a note in the order and we'll hook you up with another flavor.

By the way, we've got a Grand Opening BOGO deal going on right now, so you can get two bars of soap and a lip balm for free! It's a good time to be dirty, dry and chapped.
Posted by Tom Bellinson at 9:41 AM No comments:

We are a young species when it comes to intelligence. As we learn more about the brain, we find fewer differences between our own and those of other mammals. From a sociological standpoint, our differences may be mostly superficial. I often wonder what a race of intelligent beings far in advance of our own would think of us. Would they see the fine-grained difference between us and other mammals? They would obviously see that we are far more sophisticated at building tools. That’s a big deal -- but not the only deal.


When I look at other mammals, I see creatures that fight with each other to garner scarce resources. They are willing to do anything, up to and including killing their own kind, to improve what they perceive as a desperate situation. When I look at humans, I see the same thing. This self-destructive behavior is not in the long term interest of any truly intelligent species. I think most of us know this.


I read a lot of science fiction. I love speculation about possible futures. It makes me think about who we are now. As a result, I have come to believe that no advanced species is truly biological. We have already begun our march towards becoming a technological species. The lines are blurring.


Scientists are designing robots made from DNA. They are using a new approach called CRSPR to insert custom sequences of DNA to engineer certain traits. Is this biological or technological? Is biology defined by the materials used to produce something? Or, does “biological” refer a natural process of evolution through random mutation?


We can debate these questions, but over time they will matter less. If you could get a $500 transfusion that would replace your own blood with artificial blood that would prevent you from ever getting sick again, would you do it? If you could replace your lungs with a device that would let you run at full speed without ever getting winded and swim underwater for four hours without taking a breath, would you do it? Maybe you wouldn’t take advantage of these things, but there are plenty of people who would.


Technological breakthroughs like these are inevitable. People are already working on them. Incremental breakthroughs are occurring daily. Assuming we don’t destroy ourselves first, we will eventually start to colonize space. When we do, our current physical limitations will create a huge burden on our systems. Creating spaceborn environments that allow us to remain in our biological “Goldilocks zone” requires temperature, atmospheric and gravity controls that would not be required for technological beings. All of these things are easily overcome for a spacefaring species.


The debate about what makes us human will change with time. Any technological intelligence that is born of our creativity is ipso facto an evolution of us. We have not had to grapple with technological evolution for very long. The concept is new and it is only natural that we would resist relinquishing our biological roots. Currently, most artificial replacement parts are substandard compared with the our biologically evolved parts. That won’t be the case for too much longer. We’re already building exoskeletons that are stronger and harder than our own bones. Our cameras are far higher resolution than our eyes -- we just don’t know how to hook them to our optic nerve yet. Soon, we will start chipping away at our biology one system at a time. When we figure out how to make a better brain, we will load it with our humanity and see what happens.


When we finally accept that the things that give us the greatest pleasure are also the things that cause us to destroy ourselves, will we let go of them? If we do, what else will we be free to lose? I have no crystal ball, but I can’t help but feel that we will ultimately become purely technological beings. That is not to say that there won’t be any organic elements to our physiology, but they will be highly engineered technology -- not naturally evolved. I’d be happy to be almost biological if it allowed me to live forever and explore the universe. How about you?
Posted by Tom Bellinson at 8:33 AM No comments: