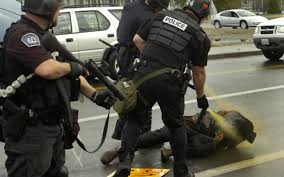 There's so much fake news out there these days. Why would you trust me? Don't! Check anything that sounds like a fact for yourself. Fact #1: The Patriot Act was sold on the basis of finding foreign actors that would use terror on civilians to manipulate governments. Fact #2: Terror is a word that has had its meaning distorted since the act was put in place. What is the difference between asymmetric warfare and terrorism? Do you know? It's an important distinction.
When small actors, whether they be governments, religious sects, or independent warlords; go up against larger actors, they must use asymmetric warfare. They fight with snipers, roadside bombs, and suicide bombers. When they use these tactics against military or government targets, they are not terrorists. When they use them on civilians, they are.
This matters because when we brand a group as terrorists, the Patriot Act becomes available. That means our government can whisk away anyone who is suspected of being involved without due process. If that "anyone" happens to be a U.S. citizen -- bye bye freedom!
Meanwhile, we continue to ratchet up military spending. There are no major wars going on for the U.S. right now, so what are they doing with all the money? Well, a chunk of it seems to be going to new ground vehicles and personal armor. Guess what they're doing with the old stuff? Fact #3: They're shipping it to domestic law enforcement agencies! You may have seen some of it in the streets lately. Police are looking more and more like the military.
Between the Patriot Act, the expanded definition of a terrorist, and police militarization, we have the makings of the perfect storm for a complete take-over. Couple this with a White House that is siding with the police to drive a wedge between them and the rest of the citizens and it's not hard to imagine a tipping point that ends badly for democracy.
We think these things can't happen in America -- land of the free. Look more closely. Freedom can be defined any way you like. Even the most autocratic regimes will generally leave people alone if they play along. Freedom is about the right NOT to play along. A quick look at what's going on in the streets these days should be a warning.
Posted by Tom Bellinson at 8:11 PM No comments:

Covid On My Mind

My sister-in-law, Carolyn, had an idea for the family: keep a daily log (or blog) of our lives during this hopefully rare pandemic. Personally, I don't expect that these things will be all that rare.

Global warming is changing our planetary climate system and highly adaptable organisms are likely to adapt more quickly during this time of rapid change. If the weather doesn't get us, the microorganisms will...eventually.

I've been thinking about the idea of keeping a journal or something, but to be honest, my life isn't dramatically different. I am a scrum master, which is a person that works with software development teams to help them be agile. That means adapting to change quickly. My company, ITHAKA, is well along on our agle journey, so we're already quite adaptable. We also have multiple offices and various people working remotely, so we have all the tools in place to work from home.

Furthermore, having been a work-at-home entrepreneur in the past, I already have a sweet set-up at home. Let's just say I don't worry too much about bad ergonomics. I did purchase a little 10" LED display so that I can see the people I'm online with while looking at shared screens. Oh, and this picture doesn't show my Herman Miller Aeron chair, which I was happy to buy for only $350 out of the back of a van in a Burger King parking lot in Belleville. I have it on good authority that is was legitimately purchased in a bulk office furniture buyout from an office closure. I'm going with that story. I love Herman Miller chairs. They fit my back just right.

I also have a Herman Miller chair in the basement -- my man cave! This picture was taken before I removed the sofa from the room. There's a little more space over in that corner now.

Music is a great hobby to have when you're homebound. I have a band called Sweet Melissa. I left the band to pursue other musical interests, but when they lost both their bass player and guitar player, Melissa called and asked if I wanted to rejoin. I did. We found a great new guitar player and we are all good friends. I have been trying to keep up with my friends by doing regular video chats, but with the band, "getting together" is a bit more challenging. Elan, our drummer, is a pilot for Delta. He still has to go to work...at airports! He's a bit more stressed than the rest of us, who are in a better position to isolate ourselves.

We found a system called jamkazam.com that might let us jam together over the Internet, but everyone has to figure out how to get their instruments hooked up first. That hasn't happened yet. A couple summers ago, I hooked up with my friend JP and occasionally my friend Noah and we jammed in the street. I really liked busking. JP moved to NYC, so I've decided to try out the one-man band thing. I was thinking that I might take it to the street this summer.

Well, with this nasty little virus spreading wildly, that may not happen. It seems the music world has taken to streaming live. So, yesterday I started trying to figure out how to do my own live streams on Facebook. I tried something called OBS, which only sorta worked. Today, I switched to trying something called livestream and lo and behold, it worked! I was just testing it out, but apparently various friends, family and acquaintances saw it anyway.

We're about to take the dog for another walk. Going for walks is one of the only things anyone can do out of the house these days, so lots of people are doing it. Most people around here are getting the social distancing thing, but a few people don't. I worry most about the kids. They may just forget or maybe they don't understand that just because they're not vulnerable doesn't mean the people around them aren't. Anyway, it's easy to catch up with the neighbors during walks, which seems sort of backwards since we're all supposed to be staying away from each other. Now that we've purchased enough food and toilet paper to stay home for a few months, it's just neighbors for a while.

Posted by Tom Bellinson at 4:25 PM No comments: