Humans: Out of Our Depth 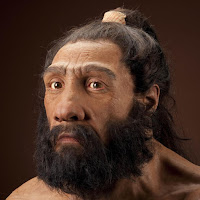 Anyone who has hopes for humans to evolve past our primate proclivities could only be disappointed by recent events. It's not really all bad news because people are far less deadly than they were only a short 1000 years ago. Even looking back as little as 100 years ago, times have improved. Maybe it is because of our strides that there are so many more of us who have lived a life almost devoid of daily violence and death around them.

The relative lack of violence in our personal lives makes the daily violence in others' lives all the more distressing. At the same time, our distance and lack of connection to the suffering people we observe, makes us less sensitive to their plight. Chimps don't care what happens to other groups of chimps.

Someday, just maybe, the world will get small enough that we will value all beings on the planet equally. Until that time, maybe we could find a way to help spread some peace. In the last century, the Europeans pulled the middle east apart. They knew what they were doing when they drew national boundaries that split tribes, while pushing separate tribes together. It was the perfect way to ensure that the once great Persian and Arabic nations didn't become great again.

Isn't it time to undo this tragic manipulation of so many people? What is needed is an area summit to redraw national boundaries that reunite the tribes and provide them with the autonomy so many have died for. If we really cared, we would be trying to fix the mistakes of the past. The fact that we are indeed doing things that have caused further destabilization in the region suggests that we (the United States Government) still likes it that way. Maybe we, the people, still do, too.

Meanwhile, our own country is getting hollowed out. The generational poor in our country are cared for at a level that is superior to those in most of the rest of the planet. However, there is a growing population of people who have worked most of their lives and have a sense of identity that includes providing for their family.

One job at a time, capital has sought the most efficient way to profit (just like economists say it should). The most efficient way is capital expenditure for equipment that replaces humans. So far, most of the machines we've built have taken jobs from people who work with their hands. The net effect is the decimation of manufacturing and construction jobs. Politicians blame bad trade deals and cheap foreign labor. Wake up and look around! The number of people it takes to make a car or build a road is a tiny fraction of what it took only 30 years ago.

For every job that equipment replaces, a rich person gets richer. In the next few years, we will see the jobs that require a human mind get replaced, too. We already have very sophisticated automated phone systems that listen to and understand questions and actually provide verbal answers. These systems have replaced rooms full of people who once used their brains all day. IBM's Watson has started providing medical diagnosis and medical robots can already collect vital statistics from a patient. Lookout! They may be coming for your job next.

Basically, the technology available to us today has outstripped out social evolution. Our primate drives cause us to abuse the very capabilities that could make a better world for everyone. If we were evolved enough, each of us could focus on making everyone else's life better, but we still basically care only about our own and those close to us. Fix this and all our other problems simply melt away.

Some say that the profit motive is the only thing that drives progress. I call bullshit. If that's true, we have enough technology to put it in charge of making better decisions than that. Here's a formula for you: people are suffering, therefore do something to end it. Wow! That's complicated. How so, you ask? By a bunch of rules we made up to make it that way. See. Bullshit.
Posted by Tom Bellinson at 7:16 PM No comments: