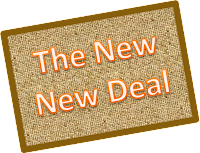 I spend a lot of cycles on this blog writing about things people could do. Some of the things to do that I write about need to be done by specific people -- usually those who are in power. There are still plenty of things us regular folks can do. Sometimes I feel as though the greatness of the United States is currently predicated on a great push downhill that we got in the 1940’s at the inflection point of the industrial revolution.

This was a time before the “New Deal” had its full effect. It was a game changer for us because for the first time, our government provided a safety net for those who would fall. Trying the high bar without a net causes people to be more focused, evaluate risks more carefully and work much harder to stay aloft. With a net, preparation can be compromised and effort suspended if it becomes too uncomfortable.

The philosophy of life is ultimately altered forever. We can see those changes in the attitudes of people today. Individuals no longer seem to concern themselves with others in society because “the government will provide.” Before the New Deal, people with the economic power to do so had to think about the effects of their actions on others. There was no safety net, so if their actions would bring others down, personal sacrifices were in order.

This could be seen in the rationing during WW2. Mostly, it was a simple reality that doing anything to earn was necessary for survival. The effects of our modern government may seem subtle. Because they “take care of us,” we have come to see “them” as a service provider. This was never the intention. We were to have a government “of the people, by the people and for the people.” Career politicians and social programs have changed everything. Now, we pay taxes and expect services. Politicians are “them.”

In 2013, less than 1% of Americans were lawyers, yet Congress was comprised of 41%. Maybe this is appropriate in a land with a tangled web of laws that no untrained person could be expected to navigate. However, it is clearly not representative of “the people.” This helps create the disconnect in which we no longer see ourselves as participants of government, but rather clients of it.

The problem with the current tax and spend economic model for our government is that it is incongruous with the system our forefathers designed. We want to keep what we earn, but if we need to give some of it away, we expect the government to take care of all social responsibilities in return. What is needed is some sort of compromise between the old and new system.

I propose that people should be allowed to choose between service and taxes. Allowing people to offset their tax burden by performing social services would reconnect them to government. It would allow people with low incomes to contribute equally to wealthy individuals.

People would simply report both time and monetary payments on their tax forms. I call this “taxtion” thus combining “tax” with “action.” The organizations such as the Department of Transportation and the Environmental Protection Agency would provide a list of work assignments that people could sign up for. They would then issue work completion documents for time spent on the assignments that would act as a W2 for actions.

These services would include required efforts that lack funding from the taxes collected. It would give citizens the option to support the government in the areas that matter to them rather than leaving the distribution of funds completely up to career politicians. There would presumably still be plenty of people with the means to avoid direct social action by serving their obligations 100% financially.


I suggest that asking people to contribute socially in a more material way with time and effort will bring them closer to a government “by, for and of the people.” That has to be a good thing. Right?
Posted by Tom Bellinson at 1:55 PM