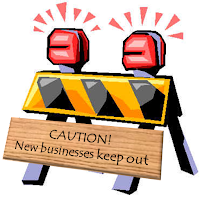 Our founding fathers were mostly entrepreneurs. Sure, many were doctors and lawyers, and some of them inherited their businesses from their fathers. Back then, all it took was a good idea, determination and persistence to have a good business. That doesn’t mean that some businesses didn’t fail even back then, but the entrepreneur always owned their failure.


Fast forward to the 21st century. Things have changed for the worse. It seems that there are a lot more barriers to success and far more barriers to entry. Let me give you a quick example from my own family. Years ago, my sister became a certified midwife. We come from an entrepreneurial family, so after working in a clinic for some time, she wanted to start her own practice. She had suitable partners among her colleagues, a proper location and the capital to start the business. Finally, she got around to insurance. Because they were not planning to have a doctor on staff, the insurance rate was going to be in excess of $1 million per year. The alternative was to pay less insurance and a doctor they didn’t need. It was mostly a wash. They abandoned the idea.


I have another friend who is a clinical psychologist. His education debt is so high that he will never be able to pay it off. Instead, he is forced to work for a public institution for a decade after which time they will forgive his debt. Needless to say, he will not be having a private practice anytime soon.


It seems the barriers to pursuing happiness are getting higher and more numerous. Education is more expensive, regulations mandate additional expenditures for compliance, and insurance companies exact an increasing toll. If you ask them, they will tell you that trial lawyers are the problem. Since lawyers were granted the right to advertise in 1976, the number of cases both legitimate and frivolous have increased dramatically. It is common knowledge that even a settlement can return massive financial rewards by middle class standards. The temptation to sue is so great that we have erected our own barrier while money flows to lawyers and insurance companies.


In industries that contain multi-national players (which is quickly becoming most of them), the big boys erect their own barriers to entry. Monsanto has been attempting to eliminate small farmers that don’t use their seed by suing them when genetic drift causes their intellectual property to show up in a neighboring field. The major players in the fast food industry have utilized their economies of scale to drive the margins down so low that it is difficult for a single location operator to make a profit.


I could go on, but you’re probably already bored with all the examples. There are businesses with low barriers to entry. You could be a web developer. Hey! There’s only about 10 gazillion of those. How about a personal coach? That’s great, but what are you going to do when you’ve finished coaching all your family members? I know! You could be a business consultant. Wait while I check LinkedIn to see if there are any of those...I’m back! And, you’re in luck because there’s only about 133,000 of them listed. Jump in line.


The American Dream is still alive and well. There are just a few more barriers to get past. People with a good network and financial resources have a much better chance. If you don’t have those things, you will need to make some sacrifices just so you can risk it all. I guess it’s no wonder most of us are working for someone else.

Posted by Tom Bellinson at 4:13 PM

Email ThisBlogThis!Share to TwitterShare to FacebookShare to Pinterest
Labels: business