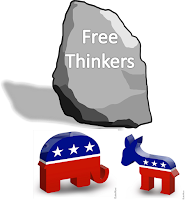 Yesterday, I was reading an article in The Economist and, as is my practice, I read some of the top comments. I really like the comment section in TE because it is one of the few places where liberals and conservatives converge. What I find interesting is that there are three basic voices in the fray:


I know, I know. You’re going to tell me that the first two groups will see themselves as the same as group #3. I don’t dispute that. However, being that I find myself in group #3, I can tell you that there is a difference. The difference is this: I sometimes find myself agreeing and disagreeing with views in both of the first two groups. I do not buy the doctrine of either group lock, stock and smoking barrel. What seems clear from my TE exploits is that I am in the minority. How can someone who is pro-choice and in favor of a single-payer medical insurance system also be in favor of capital punishment and the right to carry a concealed weapon?

The answer is, I don’t buy in bulk. I buy one idea at a time. I don’t buy planks in a platform. I don’t buy all the views of Bill Kristol or Bill Maher. I don’t just watch Fox and I don’t just watch PBS. Basically, I have a hard time understanding why anyone would abdicate their right to free thought in favor of an entire collection of ideas that have been packaged by someone else.

Reality is much more complex. The simple ideas put forth by both camps are almost always bullshit. Liberals say we’ve got to get rid of guns. We can’t! Conservatives say law abiding citizens should be allowed to carry a weapon. Sounds good until the law abiding citizen’s crazy son shoots up a school. It’s complicated.

Our lives are so filled these days. Many work long hours, sometimes at two jobs, to provide for their families. They try to pack some fun and relaxation in around their jobs and there isn’t a whole lot of time for reading up on the latest issues. Having a nice packaged set of ideas that are ready to serve starts to look like a handy time-saving device. For the same reason that eating only McDonald’s food will eventually kill you, doing either set of packaged ideas would eventually destroy this country.

Maybe...just maybe, our leaders like it the way it is. They know that the issues we face are complicated. They understand that to solve most of them, we need to develop solutions that will be complex, hard to sell to the American people and have something for everyone to hate. It’s a whole lot easier to blame the other side for holding up the show. It’s politically safer to cobble together stupid solutions that are compromises of what both sides want and then when they don’t work well, blame the other side for forcing bad compromises on them.

If you want to be part of the solution, do your homework! Read the arguments on both sides, but also do some scholarly reading on the topic so that you have a less politicized view of the issues in question. Throw out your existing beliefs and form some new ones based on something complex that has a real chance of working. Trust me on this: if the big problems we face in the world today had simple solutions, we would have solved them by now. We’re down to the hard stuff. Polarization = gridlock.
Posted by Tom Bellinson at 4:08 PM