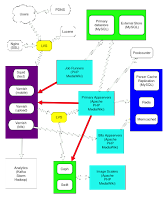 Today, Wikipedia sent me an email asking for money. I gave them some. Probably not as much as I should when I consider the value compared with what I pay for other services. I suspect lots of people won’t pay anything. They use Wikipedia just like I do, but they won’t pay because they don’t have to.

If you’re one of these people, you probably don’t pay for downloaded music either. In your defense, the music industry hasn’t exactly got onboard with the “pay what it’s worth” model. Too bad. I suspect they could get more money if they did. Studies show that people are willing to pay for value. Have you ever received a survey in the mail with a dollar bill? A company has to spend more on mailing expenses to get the same response as they get if they include a dollar in the envelope. For most of us, the time to fill out the survey is probably worth more than a dollar, but we feel the need to reciprocate.

Wikipedia is huge. They have numerous data centers and only 200 people to manage all the infrastructure as well as curating the content. Fortunately, they also have many many volunteers that watch over various pages. While it’s important to be on the lookout for inaccurate information, Wikipedia tends to have good information on most topics. It puts the old encyclopedia that I had when I was a kid to shame. I don’t remember what my parents paid for that thing, but it was expensive enough that they paid it off in installments. Further, with each passing year, it got more out of date.

Even history gets updated. New discoveries about our past are made and new perspectives are brought to light. Wikipedia encompasses all of that. Fifty years ago, if someone had said they had one place they could go to search the bulk of human knowledge for answers, you would have thought they lived 500 years in the future. What’s it worth to have that sort of jump on the future? Five dollars? Ten? Maybe even $25?


You could wait for the other people to cover your tab...or you could just pony up yourself. Go ahead, do it. I’ll wait...
Posted by Tom Bellinson at 11:40 AM

Email ThisBlogThis!Share to TwitterShare to FacebookShare to Pinterest
Labels: personal