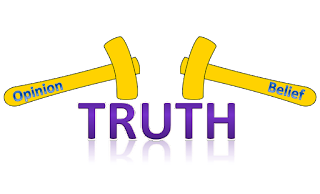 I’ve written about the truth before and probably will again. The primary reason for this is because the things I like to write about often go against deeply held beliefs shared by many people. These beliefs are so deeply held that they start to look a lot like “the truth,” but they are not. I’ve met people who think that if they believe something enough, it IS the truth. Wishing doesn’t make it so.

Here’s an example: “smaller government is better than big government.” Not everyone believes this and the people who do believe it call it “the truth.” Thus, they think their political opponents are corrupted by lies. Even science has had to deal with “facts” that have become obsolete. Newtonian physics was replaced by Einstein’s general relativity. The reality is - there is very little real truth.

Most of what we know are opinions and beliefs. Strongly held beliefs can become indistinguishable from truth. This is the source of most of the strife on our little planet. Just because you believe something with all of our heart, does not make it the truth and it doesn’t even make it right. In some cases, what might be right for you is wrong for someone else. That doesn’t make them bad, just as it doesn’t make you bad.

I try to approach a difference of opinion or belief with a very open mind. This is not something that comes naturally. It takes effort and training. It starts with conditioning yourself to start by asking questions when you encounter a difference in opinion or belief. Questions are the most powerful tool in your belt.

When you ask questions of someone, you are: A) showing respect for their opinion/belief, B) acknowledging that your own opinion/belief may be based on incomplete information, and C) opening your mind to new possibilities that could expand your understanding. Upon hearing an answer to your question, you might be tempted to think “oh, that’s wrong!” Your obvious next step is to explain the error of your co-communicator’s thinking. DON’T! Ask a probing question. Why do they believe what they are saying? Where did they hear the information that led them to this belief?

Often, differences of opinion/belief come down to events or properties that are facts. Finding a reliable source to resolve the conflict in understanding can bring enlightenment to one or both parties. Even uncovering a disputed “fact” can change the way we think about a particular belief.

What is most troubling to me is the growing number of people who don’t want to know the truth. Their beliefs are “good enough” for them. These people will either shout over you or just tell you outright that they don’t want to explore other possibilities. What is the source of this behavior? Are some people simply designed to latch onto one set of beliefs and hold onto them regardless of evidence to the contrary?


Ultimately, I am one who seeks the truth -- whatever it may be. I am not compelled to hold onto any opinions or beliefs that cannot survive careful scrutiny. Are you such a person? If not, why not? If you are unwilling to open your mind to new possibilities, then you should not be surprised when others are willing to kill and die for their misguided opinions and beliefs. That’s the truth!
Posted by Tom Bellinson at 11:23 AM