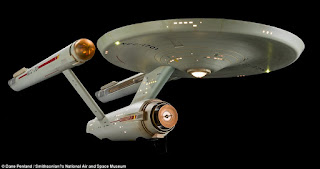 This week, the U.S. Navy puts their very first railgun into the field. That's right folks! Particle weapons are coming to a battlefield near you. No more gun powder for us. Back in the 1960's, when Star Trek first aired, the time frame represented was 300 years in the future. Here we are not even 100 years into the future and most, if not all of the technology in the show is available, under development, or being actively researched.

The XPrize contest to produce the world's first tricorder is over and there were not one, but two winners. Check that one off the list. Now, all we need is the other little thingy that didn't even have a name that Bones waved over someone to fix their broken bones and damaged flesh. At this rate, we may have to wait another 30-40 years for that.

Transporters are a bit  trickier. We have them, but the current models can only transmit a subatomic particle or two. You've got to start somewhere. There are claims of transporting larger chunks of matter shorter distances. The point here is that it is happening. Ultimately, the thing stopping us from transporting larger items is the scanning and computing power required. Of course, we continue to chip away at that too.

Replicators are now available to consumers. Granted, they can't make a hot cup of tea yet, but they can make just about any little plastic thingy you can think of. Specialized 3D printers can now print metal, electronic circuits, skin, and even organs. It is simply a matter of time before these devices are able to build more complex items. As we continue to miniaturize our devices, it is not unreasonable to expect that within the next 50 years, we will have printers that start with base material and rearrange its atomic structure to make anything. The trick to doing this is mostly in the necessary computing power and new graphene based chips will give us that (again - already developed technology).

The impulse (or ion) drive is well developed technology at this point. NASA is considering it for future deep space missions. They need to consider it because warp drive is a bit farther into the future. The more amazing thing is that warp drive is now theoretically possible. There are a number of theoretical models out there. My personal favorite is the Alcubierre drive, proposed by a Mexican physicist of that name (sorry Zephram Cochran - not in this reality).

Some of the stuff they had seems almost antiquated by modern standards. Take those crappy tablets they used. Why did they have to pass them around? Did they not even have WiFi? The original Enterprise didn't even have a holodeck, but we're closing in on that one pretty quickly. We certainly have holo-video systems and new research is ongoing. Of course  the most ridiculous piece of technology was the stupid flip phone. They are so last millennium!

Maybe the greatest invention of Star Trek was the economy-less society. What if people could live a comfortable life with all the basics and pursue their dreams unimpeded by the need for personal assets? Think of all the inventions that could be brought to fruition if anyone with an idea had the resources to fully produce it. Without an economy, there would be no need for greed. If that were the case, most of the people that would have been working to improve their own lives might start focusing on improving everyone else's along with the rest of the planet. Just a  thought.
Posted by Tom Bellinson at 9:39 AM

Email ThisBlogThis!Share to TwitterShare to FacebookShare to Pinterest
Labels: technology