Building a Band: Not as Easy as You Might Think 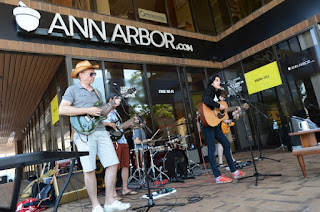 I've been a musician most of my life and because I play bass guitar, being a solo act has always been out of the  question. That has left me with two choices: join a band, or start a band. Joining an established band is pretty easy because someone else has already done the heavy lifting for you. All I need to do is fit in, which has its own challenges, but at least I control most of them.

The thing about joining someone else's band is that its difficult to find something that's just what I want, so I need to come to it in the spirit of supporting the existing mission. By mission, I mean the type of music, the places the band wants to play, and the frequency of rehearsal. Even if all that works out, having longevity with a group of musicians is hard.

So, what's the secret to longevity? The family model comes to mind. Families are formed when two people fall in love and then they produce some offspring. The Offspring don't get a say in the matter, so building a family is a lot easier than a band, where every member of the family has to be recruited.

Beyond that, the characteristics that go into a tight knit family are similar (with some additions).

Reliability - I have limited tolerance for unreliable people. Others may be more flexible about this, but I expect bandmates to do what they say, so things break down quickly when people don't keep their word.

Passion - I am committed to being a musician and all that it means. Other things may vye for my time, but some of them will need to get in line behind music because I'm not giving it up. People who are just passing through a musician phase probably won't have the staying power needed.

Work - Having a strong work ethic is common across all successful people (assuming they were self-made). I can't tell you how many times we've tossed out a musician who chronically showed up to rehearsal unprepared. It becomes a giant waste of everyone's time and gets annoying really quickly.

Commitment - Commitment to what? Good question. For me, the most important things are goals. Setting them and staying on the path to reaching them. I suppose I could have also called this one persistence because it goes hand in glove with commitment. Commitment isn't something you can have every third Tuesday. It's an every day sort of thing.

Patience - Everything is not going to go right. Well, maybe it will, but I never count on it. When obstacles emerge, dealing with them harshly or hastily can often result in emotional damage that is hard to repair. Not all problems require the kid glove treatment, but sometimes you just need to give people time to get back on track when things happen (family issues, work issues, etc.)

Transportation - This one could be left out, but having dealt with people who did not have reliable means of getting around, I decided that I couldn't bury it under reliability. I've been in bands with a musician that didn't drive and they were always reliant on someone else to get them to rehearsals and gigs. It's never worked.

Now, all the things above could be applied to any endeavor, but there are some things that apply specifically to musicians.

Musical Preferences - Given that there are countless genres and subgenres of music, finding people that want to play what you want to play can be challenging. So challenging in fact, that we often compromise on this one. The problem with this is that compromise has a nasty way of gnawing at you over time. I've left a few good bands because I just couldn't enjoy the music anymore. Hard as it was to walk away from something that was working on all other fronts, I'm in it for the love of the music first.

Equipment - This isn't usually a problem, but I have had situations in which band members had faulty or inadequate equipment and the frustration eventually boils over. I was in one band many years ago in which the drummer was so broke that he couldn't afford sticks. This was compounded by the fact that he was a banger and regularly broke them. One time, he showed up to a major gig with one pair of sticks. In fact, one flew out of his hand during Jimi Hendrix's Manic Depression and he had to finish with his hand while I attempted to flag down a roadie (who was busy chatting up a girl) to fetch it for him.

Skill - I put this one last, not because it is least important, but because it may be the best one of these characteristics to sacrifice. If someone has all the other qualities listed here, lack of skill should be a transient issue, meaning it will be resolved over time. Now, if you're looking to start a jazz/rock fusion band, you may want to stay away from beginners, but most genres of music can be played in fairly basic form. If you have more skill that other members of the band and become frustrated, see patience above.

There you have it! What are the odds of finding a whole group of people that share all of these characteristics? If that isn't enough, it's always helpful when you actually enjoy each other's company. You can build friendships just around music, but it helps longevity if you actually want to be together anyway. I have many lifelong friends who performed with me somewhere along the way, but now don't. We still get together to jam sometimes, but we're not in a band anymore.

If you want to assemble your own band, make a checklist of the things above and make sure all of the members of your newly formed band have them. You're going to be tempted to look past a few of these when you find a really great musician or someone you really like. Good luck with that!
Posted by Tom Bellinson at 11:57 AM

Email ThisBlogThis!Share to TwitterShare to FacebookShare to Pinterest
Labels: music