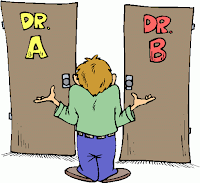 There can be no doubt that the demands on the average human mind have increased manifold in recent decades. Globalization and the Internet have combined to create a tsunami of information which is available to anyone with a smartphone and a data plan. Increasingly, that's everyone in the United States. Here in Ann Arbor, even the homeless are given smartphones with a basic data plan.

Technology has been steadily increasing productivity since the beginning of the industrial age. As productivity increases, what happens in a single day looks more like what would happen in the course of a year of an agrarian society. Consequently, it takes one with an extraordinary mind and the motivation required to keep up with the underlying facts surrounding the big decisions our country faces.

It's no wonder then that most of us are always looking for someone who we trust to distill down to bite-sized, understandable, consumable chunks, the issues we face. Our current president, Donald Trump, is a master at this. "It's gonna be a great healthcare plan" is just the sort of information anyone can process. "Our current trade deals are terrible. We're going to throw them out and have much better ones" is much easier to digest than the complex web of interrelated issues around global trade.

Here's the fundamental problem with the complexity of our issues and the speed with which they evolve: most people can't keep up. Democracy depends on a well informed public to work effectively. This is no longer a reasonable expectation.

This leaves our democracy at the mercy of spin doctors, pundits, and power brokers. Most of us have no choice but to get our viewpoint from people with an agenda that we can't fully comprehend. So, we decide who we trust and we trust them. But, what have the people we trust to tell us what to believe about how to solve our country's and the world's (considerable) issues done to earn that trust?

What can they do? Issues are often so complex and nuanced that verifying what is a fact and what is an opinion or completely made-up bullshit is almost impossible. Unfortunately, some of the people we trust to inform us take advantage of this fact in the worst way imaginable. Is this a fact? If you blindly accept that everything you are told by your trusted sources, you might argue that I'm the one who's full of shit. Unfortunately, unless you take the time to deeply research some of the "facts" you're being given by your new source, you'll never know.

Therein lies the problem. In our country, we have two parties. Each party has a point of view. We are given the option to choose between these two points of view. Do you really believe that there are only two points of view? As complex as the world has become, what is the likelihood that our options can be boiled down to only two that make any sense? THAT doesn't make any sense.

The great thing about democracy is that everyone has a choice. When the system becomes so corrupt that only two points of view are represented, that's not really democracy. It is a mere shadow of a democracy. If we are to get back to a real democracy, we need more voices. We need more points of view. We need people to who we can trust to fact check our leaders and call them out for lying. Realistically, it's unlikely we'll get any of it.
Posted by Tom Bellinson at 2:12 PM