Conservative Perspective of a Revisionist 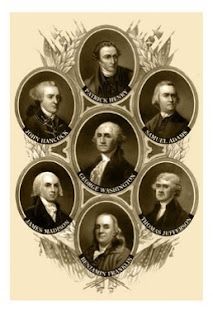 Most of us tend to take up the politics of our parents. It's hard to grow up in a house listening to people taking one position and then change that position later (Andrew Breitbart tried, but couldn't). It happens, but not often. I grew up in a house with two very liberal parents.

I like to think of myself as an independent thinker. Unlike most people, I actively seek out the viewpoint of all sides of any issue. The challenge with this is that the underlying philosophies that inform any particular issue are different. Without the right context, it's always easy to see the opposing viewpoint as tainted.

Realizing this, I've been doing some reading lately to gain a better understanding of the underpinnings of the conservative viewpoint. I've come to realize that there are some stark choices one must make before taking one side or the other. I've tried to sum these differences up in simple terms. Here's what I've got:

Conservatives: believe in freedom first. To have freedom, individuals must own the responsibility for their lives. If more successful people are able to shape the playing field because of their power to do so, those who do not have power must figure out how to play on their playing field.

Liberals (I prefer this to Progressives): believe in fairness first. Those with power stack the system in their favor and make it harder for those without power to gain it. Therefore, the system must have safeguards to even the playing field.

My suspicion is that few conservatives or liberals would argue with these definitions. If you are a liberal, you will see the conservative premise as flawed and vice versa. If I'm right, this is a great start to understanding.

So, here's where I think the conservatives have the high ground. When this country was founded, the men who conceived it had lived under the tyranny of a government that imposed themselves on their lives. Our founders sought to create a system in which the people would have ultimate control over anything the government did. They set up a system that would be prone to gridlock right from the start, knowing that these counterbalancing structures would ensure that the government couldn't run away with their power.

Since the states began life un-united, leaders of each wanted to make sure that the Federal government could not wrest too much control from their lives, so they kept as much power in the hands of states as they could. This would ensure that each state could shape the lives of their citizens according to their local desires.

All of this made perfect sense in a new land full of untapped resources and virtually unlimited opportunity. It is in this context that we must understand the mindset of the conservative viewpoint. Every conservative scholar that I've read refers to these roots as the driver of all philosophical positions.

The liberal view of the world did not even exist in the beginning. While there were differences between parties back in the early days of the union, I suspect that there was little argument about the principles discussed above. So, what happened?

I can only speculate about the origins of modern liberalism. There are undoubtedly too many variables to classify. I believe there are two biggies that ought to be near the  top of the list:
Both of these are game-changers that bring into question the logic of the conservative viewpoint. Let's just take these two apart to see if we can find some justification for the liberal viewpoint.

Large ships, then large airplanes and now the Internet have connected people around the globe in ways that our forefathers could never have imagined. It would be unfair to have expected them to understand what the world would become when the economies of different nations developed the level of interdependence that we see today. If they had, what would they have done differently?

For starters, they may have given the Federal government even more power over commerce and regulating the economy. If they had allowed states to have most of the control over commerce, the "United" States would have not been very united in the eyes of foreign governments. At best, this would make our country a very difficult trading partner.

Most importantly, money flows almost seamlessly from one country to another. This means that government policy plays a very complex role in the health of our economy because capital seeks the best ground and that may not be ours. Key decision-makers in large corporations now control, with there choices about money flow, whether our economy does well or not.

As the Industrial Revolution began gaining steam, the most successful entrepreneurs of the day (also known as robber barons) saw trouble on the horizon. By the way, that nickname is interesting because barons were European royalty and one could argue that they were U.S. royalty. Visit some of their ancestral homes and you will discover that they are castles. The parallels are considerable.

They realized that if the government was allowed to control money, they could disrupt the empires that they had built. With all their power, they created the Federal Reserve, which is a quasi-governmental organization run by bankers. The president is allowed to hire/fire the head banker, but he/she must select from leaders in the banking industry if they make a replacement. Essentially, the bankers are in control of the money in this country. Period. Full stop. No argument.

The Federal Reserve controls how much money we have and the interest rates at which it is distributed. These are the only two levers by which money is controlled. Thus, the government holds no levers to control the medium by which our economy functions.

Why is this a game-changer that motivates liberals? Because, without governmental controls on money, modern-day robber barons can endlessly stack the deck in their favor, thereby leaving everyone else further and further behind and more and more under their control.

Each of us needs to decide between idealism and practicality. The ideal of this country lives in the hearts and minds of many of us. We long for the life that the framers promised and we believe that by rolling back the insidious changes made by the revisionists, we can get back to that ideal.

Others look at the reality of today's world and believe that it can't be undone. There are too many factors, which cannot be controlled which make it impossible to recreate what we once had. Further, half measures only seem to make matters worse. Thus, trying to roll back and failing puts us further and further away from the goal.

If you believe we can successfully roll back, you will continue to fight for the conservative attempts to make the government smaller, reduce regulatory control over our lives, and put more money back in the hands of the people who earned it. If you don't think that is possible, then you will want to take steps to level the playing field so that those who have benefited excessively from the changes of the industrial and information ages do not wrest complete control away from the rest of us.

As much as I, too, long for the good old days, I don't think we can go back. Most of the really rich in the world are no longer contained by a single country. Multinational corporations can shift their economic interests to the highest bidder in a global competition for economic resources. If we were to roll back the Federal rules that contain them, they would strip our country of resources and send the money offshore to avoid whatever taxes we decided to charge. As our infrastructure crumbled, our overpopulated workforce may once again become attractive because they would have to work for third-world rates.

What made us great the first time around was that we led the world in industrial and technological advancement. That is no longer the case and no matter what we do, it will never be the case again. It's too hard to keep secrets anymore and it's too easy to copy what someone else is doing.

Just look around. The countries that have the most growth are the ones with big labor pools willing to work cheap. Do we want that for ourselves? I think not. Our problems are extremely complex and we will need complex solutions or we will need to re-imagine our whole system. Nobody's even talking about the latter option. At least not in Washington.
Posted by Tom Bellinson at 9:23 AM