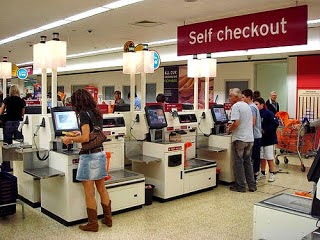 Once upon a time, there was an argument that technological breakthroughs actually created jobs.  The argument was so compelling and replete with empirical evidence that most people accepted this as a fact.  The automotive industry created millions of jobs as did the modern textile industry.  The industrial age was good to the average worker.

Then came the information age.  Technological breakthroughs came fast and furious.  The industry was born out of nothing and it created plenty of new jobs.  When a few people started to suggest that maybe some of this new technology was stealing jobs from humans, Those responsible for the health of the economy trotted out the old argument that technology creates more jobs than it eliminates.

That may have been true at one time, but technology has reached a tipping point.  With so much of our manufacturing capability being highly automated, new breakthroughs aimed at "increased productivity" are really targeted at maximizing the use of capital -- and I don't mean human capital.

Let's not kid ourselves.  Technology doesn't need a vacation.  It doesn't need time off for a sick kid or a death in the family; and its maintenance contract is undoubtedly far cheaper than the healthcare for the workers it replaced.  Technology that replaces people almost always increases the efficiency of capital.  This is the embodiment of maximizing profits -- the goal of any economic endeavor.

So, as robotics and mechanical systems have gotten more sophisticated, more and more blue collar labor jobs have been replaced with technology.  What about sales jobs?  Well, now we have integrated voice response systems, interactive websites and stay tuned for chat-bots that are almost impossible to tell from a human.  We may still need good salespeople, but not near as many of them as we once did.

"Get an advanced education," is the cry of our beloved leaders.  Just be careful which path you choose because those jobs aren't safe anymore either.  There are now artificial intelligence algorithms that can write world class classical music, diagnose disease better than most clinicians, and invent new interesting chemical substances faster than any chemist.

Our government hides the truth from us in their unemployment numbers.  Many families have given up on two incomes.  Many children continue to live with their parents well into their twenties and even thirties.  Our economy is being hollowed out by technology.  If you don't think your job is in jeopardy, just keep watching.  New technology is coming to get ya!

Pretty soon, business owners will hire employees just to keep them company.  People won't need to do any work.  They can just watch it being done by technology.
Posted by Unknown at 8:32 PM