Why Hillary Will Win the Presidency 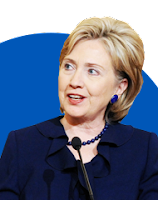 I'd like to start this post by saying that I'm not a huge Hillary fan. She's a horrible orator, but maybe not such a bad politician. Her positions are calculated based on what her team thinks she needs to do to win. In other words, she's not particularly idealistic.

Let me also say that I like Bernie Sanders. He's affable and idealistic. He has a good grasp of the problems this country faces and I believe he truly desires to fix said problems. The reality is, he can't. The system is completely stacked against him. Washington has basically shut down Obama, who is far more pragmatic than Sanders. Congress won't let Sanders order paperclips.

It's starting to look likely that Trump will win the the Republican nomination. Anyone with half a brain who is willing to actually put it to work ought to be able to see that a Trump presidency would be a disaster. You just can't run a country -- especially the most powerful one on the planet -- like a game show. Maybe Trump would hire some proper diplomats to curtail his belligerence, but with an ego that far out of control, I wouldn't bet on it. With him as president, I could see us fighting a world war in which Europe and Latin America are part of the opposition. Simply put, the man is dangerous and there are many rich and powerful people who are smart enough to do anything to stop him -- up to and including voting for a Democrat!

This brings us back to Hillary. Her flexibility and pragmatic views make her far more palatable to more centrist Republicans. In a general election between Sanders and Trump, a third party candidate is more likely to win. In a two candidate race, lots of smart Republicans will begrudgingly vote for a sane, but ideologically divergent Sanders rather than a crazy man. Hillary is a no-brainer. That's why Hillary's war chest will grow rapidly if she doesn't win big tomorrow night. Republicans who want to hedge their bets will help her out as a backup. As is not uncommon, Republicans may even start voting for Hillary in the primaries, writing their own party's choice off as a lost cause.

What is this Trump phenomenon? I get it. People are sick and tired of Washington insiders casting them aside. Making choices that provide economic cover for the rich and powerful while stripping the middle class. Trump, unencumbered by reality, promises to reverse all that. Whoopee! Tell them what they've won, Bob? A crackpot president who won't be able to get anything done! Sweet!

At least Hilary will keep things moving along until the next crisis. Maybe it will be a real depression next time. If it happens on her watch, I think we will be better off than if Sanders or Trump were in charge. I'll take a pragmatist over an idealist or a game show host any day!