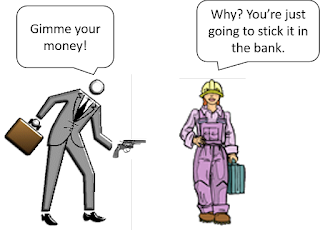 I read an article yesterday in The Economist about how global fiscal policymakers are running out of tools to fix the next economic downturn. Interest rates are near zero and even negative rates have limited potential. All the levers of control have been pulled and yet, here we are -- facing sluggish growth that threatens to stall. Government spending means more debt and nobody seems to have the stomach for that either.


I’m a self-confessed Trekie. In Gene Roddenberry’s series, capitalism has been abandoned. Capitalism is a dear old friend that has been the best way for humans to exchange the things they need with one another. It is the best system we know for managing scarcity.


WHAT IF SCARCITY HAS BECOME A MAN-MADE CONDITION?


We assume that scarcity is an underlying fact of life on Earth. Is it? Are there any problems of extraction, reclamation, production and distribution that couldn’t be collectively solved with a combination of innovation, initiative and resources? Is it possible that unnatural divisions between us are the ultimate cause of scarcity?


If we all worked together for the common good, what could we accomplish? It seems to me that this initiative would need to start with the rich and powerful (who are usually one and the same). In 2013, the Forex currency exchange was trading $5.3 TRILLION per day. At that time, the daily global trading of goods and services was estimated to be 25 times less. That’s just currency folks! This does not take into account money sitting in banks or in other trading accounts. None of this money helps real people with real problems. I suspect it causes them.


It seems like it is the nature of the rich and powerful to hold onto what they have for as long as they can. When the system finally collapses (which it always has eventually), they are left with nothing. Frankly, in times past, they often ended up with their head in a basket, swinging from a rope or some other sudden and violent death. We like to think we’re more civilized now, but one only needs to follow the news of the day to know that’s just wrong.


What could rich and powerful people do if they took their money off the sidelines and put it to work? For starters, they could build infrastructure. Ideas already exist to build a global “enernet” that would provide cheap power wherever it is needed. We could build new transportation infrastructure on top of the old such as that proposed by SkyTran. Most importantly, we could fully fund (and thereby accelerate) research to address every unsolved problem facing humankind.


Just try to imagine what would happen if the global economy was 50 or 100 times more effective than it is now. What could we do? It seems we’d have virtually unlimited ability to create the golden age of humankind that we all know in our hearts is possible.


Behind it all are a few extremely powerful people who have convinced themselves that changing the system would be disruptive and destructive. They believe that from their vantage point, they see things more clearly than the rest of us. They understand about forces we know nothing about that would derail any attempt to create a better world. They are wrong. They are part of the same cycle that humankind has repeated over and over since the dawn of civilization. If they put all their power and resources behind a transformation. They could make it happen. They could own the creation of a future that unbinds us from the shackles of the past. It would take courage. It might even get messy at first. But, what better legacy to leave behind?
Posted by Tom Bellinson at 8:45 AM