When the Punch Bowl Gets Stolen 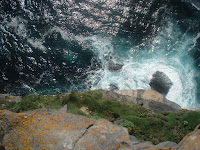 Someone once defined the role of the Federal Reserve Board as the ones who job it is to steal the punchbowl just when the party really gets started.  The reason for this is because "The Fed," as they are oft referred, has one primary job -- to protect wealth.  You see, if inflation gets out of control, then people who owe money, which is most of us, get a break because the money we use to pay back our debts is worth less than the money we borrowed.  Unfortunately, lenders (like banks) get screwed.

Since bankers and other rich people mostly control the government, it should come as no surprise that policies designed to keep inflation down are paramount.  What's happened recently seems to be some sort of selective inflation.  The basics, housing, energy and healthcare are all getting very expensive.  The only thing that has been protected is food.  Our government knows from history that if food gets too expensive, revolution isn't far away.  So, they keep food cheap along with smartphones and cable TV. These rising costs are small for rich people, but represent a large portion of the bills us less wealthy people pay.

In the past, when the economy struggled, The Fed would lower interest rates.  This made it cheaper to borrow money and that helped get the economy going again.  Now, interest rates so close to zero that they don't matter to the types of people who borrow to help stimulate the economy.  So, when the banking industry got caught with their pants down in 2006-2007, lowering interest rates was not an option.

The Fed also has the ability to print money.  In the past, when they printed money, they had to be careful not to cause inflation (remember, that's bad for them).  Keep in mind that The Fed is not the government.  They are bankers.  Bankers print money as a last resort because of the risk of it causing inflation, so when they do it it's because they're trying to avert a rather large economic disaster.

When the housing bubble burst, they tried something that seemed new.  It's called Quantitative Easing.  Given that the vast majority of money is now electronic, printing money is no longer the answer.  Everything is done by computers.  Quantitative Easing (or QE for short) is a way to make money just by changing the electronic balances on certain accounts.  So, when The Fed "buys debt" from banks who have bad loans, they are using their power to magically make money appear out of nowhere to reduce the debt balance at the bank and thereby "give" them more money to work with.  That's QE!  The money comes from "The Fed."  Where do they get it?  They make it up -- that's where.

As long as rich people don't panic, the system is essentially safe.  Here's the thing -- our system is really messed up.  Our actual reserves are way way lower than they should be and investors have made margin bets with money they don't have.  These bets on derivatives and stocks and bonds, are backed by nothing.  If something happened to cause the market to crash and all of these bets were called, there just isn't enough money to pay them off.

Unfortunately, since it is bankers making these bets, they have also taken the liberty of writing laws to ensure that they get paid first if money is owed to them.  Given the size of these debts, there won't be any money left for us regular folks.  The only option is to print more money to pay everyone off and hope that nobody complains.

That's what the bankers have been doing lately.  When things get bad, they print money (or QE it into existence) and hope that nobody notices.  So far, they haven't.  How long will this charade continue unnoticed?  It's impossible to predict.  If you asked an expert 100 years ago about the three trillion dollars that were made up in the last crisis, they would have said there's no way it would go unnoticed, but it did.  How big will the next bailout be?  Can it go on forever?  I don't know, but I do know that there is $3,000,000,000,000.00 more out there than there was 10 years ago and nobody earned it.  No company made it in profit. There was no economic activity in the "free" market that created it.  That, my friends, is not capitalism.  I don't know what it is.

QE is the only trick The Fed seems to have left.  Let's hope it keeps working, because if it doesn't, our whole economy is going down.  That's what I call stealing the punchbowl!

One final note, if you want to hedge against a potential collapse, consider buying some bitcoins.  The supply of these is controlled by an computer algorithm that no government controls and cannot be manipulated.  When rich people start running for the door, this is probably where they will run to.  If you think bitcoins are expensive now, imagine what the price would be if billions of dollars (and Euros and Yuan...) were flooded into them in the early hours of an economic meltdown.  Sooner or later, even rich people may stop trusting The Fed to protect their net worth.  Then, we'll have real trouble on our hands.
Posted by Unknown at 8:41 PM

Email ThisBlogThis!Share to TwitterShare to FacebookShare to Pinterest
Labels: economics