A few months ago, Mike Cox, the attorney general for Michigan filed a federal lawsuit to stop the flow of water from Mississippi river tributaries into Lake Michigan. The claim is that Asian carp are migrating through these channels into the Lake. Further, once there, their affect on the Lake’s ecosystem will be devastating. Nonsense! Asian carp are filter feeders, which means they eat algae that is floating in the water. Another invasive species is the zebra mussel. They have already finished off most of the algae floating in the waters of Lake Michigan. Therefore, the large Asian carp are going to find it difficult to survive in large numbers. 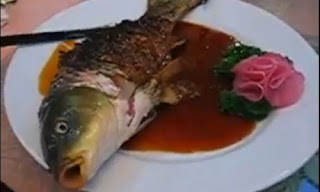 It is likely that Mike Cox and other members of the Michigan’s government know this, yet they persist in their lawsuit. Why? Because this isn’t about fish, it’s about water. Great Lakes states want to control the water flowing into and out of Lakes. They know just how valuable the largest fresh water supply in the world will be in the coming years. As global climate change takes its toll on the planet, rainfall patterns will continue to shift. It is likely that some major population centers will suffer massive droughts. In order to survive, people will either need to leave (an economically devastating prospect) or purchase large amounts of water from elsewhere. Hmmm…now where might there be large amounts of “extra” water? Oh, I remember – the Great Lakes!

Welcome to world war four – the war over water. Everyone knows that large scale diversions of water from the Great Lakes will be devastating to an already suffering ecosystem, but standing on the shores of any of the lakes and looking across at a watery horizon makes it difficult to imagine that we don’t have some water to spare. If Michigan was still having an economic tough time, selling some high-priced water might be just the trick (hey, we bought Canadian garbage – don’t rule anything out).

The problem is, Great Lakes water doesn’t belong to Michigan. It belongs to Wisconsin, Ohio, Indiana, Illinois and Ontario as well. In case you hadn’t noticed, that last one makes this an international concern, which means the U.S. federal government might have something to say about it. Hell, there’s no way the federal government will stay out of this one anyway.

These early skirmishes over “fish” are just a test of power. Can individual states control access? Will the federal government step in? Can Great Lake states/provinces cooperate with each other? This may seem like minor stuff while we’re still fighting world war three (the war on terror), but make no mistake, this is the birth of world war four – maybe it won’t turn violent, but I wouldn’t bet on it.
Posted by Unknown at 8:45 AM