Why We Need to Revive the U.S. Labor Party 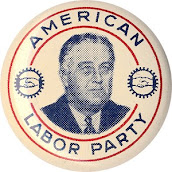 The Democratic party used to be pro-union and support workers' rights. If you are a member of the labor class in this country, do you still feel like they do? I don't. If you're like me, you work for an employer that pays you well enough to have a reasonable lifestyle and provide sufficient benefits to keep you out of bankruptcy if you get sick.

However, the majority of Americans struggle with balancing the demands of family life with economic requirements. If you are one of the people I'm talking about, you know what I mean. First, you have to put food on the table. At the same time, you need to have a table to put the food on and that requires a roof over your heads. After that, you need to have some means of transportation to get around, whether that's a car or public transportation.

Our political system is broken. Everyone knows this, but we keep expecting the foxes, who are guarding our current hen house, to take care of us chickens. They have no interest in it. They want to keep things going just enough so that they can keep eating us. The incentives in our political system no longer favor the working class citizens in this country. Both parties claim to care, but their actions continually demonstrate that they don't.

The fix is simple: introduce a Labor Party. A Labor Party would represent working class Americans. It would fight for living wages, educational opportunities, and a healthcare system that doesn't bankrupt people without employee sponsored insurance. While the party would need to have positions on other national issues, those issues would not be a central focus.

Even if candidates for the Labor Party don't win elections at first, they would force Democratic and Republican politicians to address these critical issues...because if they don't, we may just elect politicians who will focus on these issues. Even though the Labor Party may not get a majority in Congress, they could take a majority away from both Democrats and Republicans, thereby forcing those parties to compromise in order to gain their votes.

Eventually, a Labor Party could gain enough strength to wield real power, but even before then, they could gain enough influence to bring the old parties to the table. We need to fix these real problems in our country. They unlock the economic prosperity that has make the United States the great nation it has become. While we sit here debating, the Chinese are busy building their middle class. With 1.2 billion citizens, even without wiping out the horrific poverty that exists in China, they can easily become the globally dominant economic power.

If we don't fix these problems, and fix them soon, China won't need our markets to sustain theirs. On that day, we could be in a world of hurt. Imagine what would happen if China just stopped shipping products to the United States. Go ahead, I'll wait. Done yet? Did you picture a world with no smartphones? No appliances? No cars? No electronics? No toilet paper? The list just goes on as long as you can imagine. Put bluntly, we would be totally screwed.

Not only do we need the stuff China makes, but they've been busy locking up deals to control much of the world's remaining sources for raw materials like minerals and ores. You can't make things without these materials, even if you did have the manufacturing capacity. A Labor Party would be focused on creating the working class jobs like those in manufacturing.

So, we could start electing Labor Party candidates that will turn this situation around. Or, we could just wait until the USA is just an empty shell of the country it once was. If you're wondering what a washed up world power looks like, check out Iraq. The Ottoman Empire once ruled the world. I doubt you'd want to live there now.

Posted by Tom Bellinson at 4:45 PM