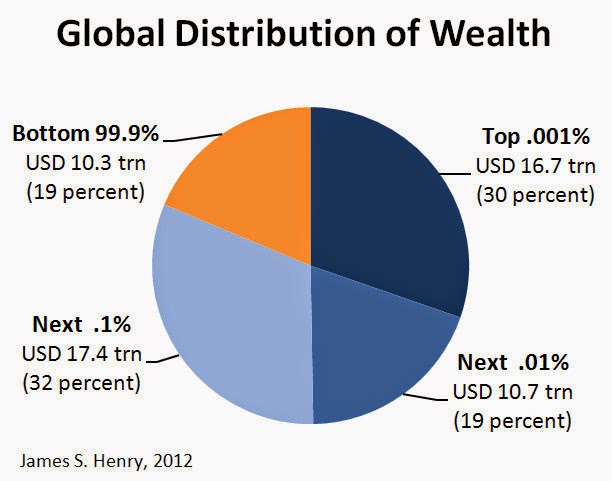 I was watching a movie the other day and one of the characters said the top 84 wealthiest people in the world control more economic power than the poorest three billion.  I don't know if that's true, but if the chart on the left is accurate, it's probably not far off.

We talk a lot about growing income disparity in the United States, but the insidious nature of the global economy is that income disparity is now a global problem that cannot be solved by national initiatives.

If one government attempts to choke off the wealth creation abilities of certain individuals, they will simply seek residence elsewhere.  There will always be some country willing to allow individuals to accumulate as much wealth as possible.  Our history as a species has retold this story many times.


This story is so common in our history that it is far more difficult to find examples of smooth transitions of power.  If you're looking for a smooth transition that doesn't involve an external colonial power, the search will be even more difficult.  Why?  People with power never seem to want to lower their standing for the greater good.  They always believe in their own legitimacy, no matter how stacked the system may be in their favor.

Is it possible to have an effective redistribution of wealth without a revolution or other form of massive social upheaval?  Maybe.  I have a simple idea that just might work.  It would require a global treaty, but it could be implemented by individual countries.  The basic premise that one must accept before seeing the value of this idea is simple:  taxation is ultimately a form of wealth redistribution.  When kings taxed the peasantry, they were redistributing wealth to themselves.  In the U.S. we use tax money to pay government workers, contractors and welfare recipients.

So, if the tax code can be used for that purpose, why not be clear about it?  To make this work, we eliminate corporate taxes.  We eliminate the current income tax code and replace it with a progressive tax rate.  The rate is progressive, but based on income ranges.  The dollar amounts would need to be worked out, but it might look something like this:


Again, these numbers are just an example, but the concept is simple.  Your effective tax rate goes up on incomes a higher levels.  So, nobody (even rich people) pay taxes on their first $20k of income.  If you make $50k, you will pay no taxes on the first $20k, but you will pay 12% on the next $30k.  Eventually (whether it is $10m per year or $50m), there needs to be a point at which income is maxed out.  The system has given all it can to one individual.  Live with it!

Not fair, you say?  Here's what isn't fair: people with lots of money have a steady stream of opportunities to use their wealth to increase it.  People without wealth must be creative, hardworking and persistent; and then there's no guarantee of success.  No, the world is not fair.  Why should it be more fair for rich people?  Their power has corrupted them into believing that they have legitimacy to decide the fate of society writ large.  If history is a good judge, they will eventually discover that power is ultimately granted by the masses and it can be taken away by the same.

Of course, giving the government all that money is concentrating power elsewhere.  This is another problem.  One which I will discuss in my next post about infrastructure and welfare.