Outside In From the Inside Out

Governments ultimately exist for one reason – to control their people.  Citizens expect their governments to take care of them in certain ways, but this only represents the “obligations” of government, not their reason for existence.  I have written elsewhere about the nature of power and the type of people who seek it, so I won’t belabor that point here.  Suffice it to say, governments are controlled by people who seek power.  Power means control.


The challenge of any fledgling government is to decide how to gain control of the population.  The most common choice is by force.  Most governments are born out of violence, so why not ride the horse that brung ya?  Maybe after a few generations, if some other group doesn’t seize power by violent means, a government will decide to settle down and take a more egalitarian approach.  But, the goal never changes.
In authoritarian regimes, the people know what to expect from their government.  They usually know the truth about the brutality with which their government dispatches control of what gets said and what gets done.  They may not like it, but as long as the government has some means to avoid wholesale revolution, who cares?

Democratic regimes, on the other hand, face a more daunting challenge.  How do you control your population without pissing them off?  The answer is: disinformation.  All a government needs to do is get their citizens to believe what they want them to believe. 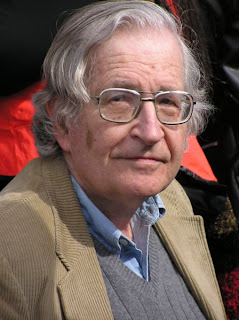 I know you’re probably thinking that something like this couldn’t happen here.  You’d be wrong.  I took a mini survey around the office for a couple weeks; asking anyone if they had heard of Noam Chomsky.  Nobody had.  More people have heard of Aleksandr Solzhenitsyn.  They have something in common, they are (or were) considered to be the leading dissident by their respective governments.  Solzhenitsyn was a Russian dissident.  Noam Chomsky is American.  Sozhenitsyn spent years in a gulag.  We don’t do that sort of thing here in the good ole U.S. of A.  So, Chomsky is allowed to roam “freely” and speak his (considerable) mind.  And yet, you’ve probably never heard of him.  How is that possible?

Because our government doesn’t want you to know about him.  His ideas are subversive.  He believes that our government should not engage in terrorism, incitement and unprovoked acts of aggression.  Our government believes otherwise.  So, when our government takes provocative actions that go against the common beliefs of its citizens as to how our country should operation on the world stage, those actions are either covered up or obfuscated to the point where the news reporting is unrecognizable compared with the reality.

Where is Noam in all this?  Oh, he’s blogging and speaking to anyone who will listen (check out www.chomsky.info).  Who will listen?  Because he is banned for all major news outlets, the government can brand him as lunatic fringe or a conspiracy theorist and people will believe them, when, in fact, he is a brilliant academician who cares about truth and justice for all (just like in the pledge of allegiance to the Flag).

Like most citizens, you probably don’t care about all this as long as you can enjoy a comfortable lifestyle free from undue hardship.  Meanwhile, thousands suffer and die by the hands of our regimes, because the puppet masters think that’s how it needs to be.  One day, maybe we will wake up and decide to give a crap about the truth, but for now, most of us are content to live in ignorant bliss.  After all, if you believe the truth about the actions of our government, you may need to do something about it.  And that’s a bunch of effort we can all just do without.  Meanwhile, we’ve got blood on our hands.  The only thing separating us from having to live with it is our ignorance.  So, don’t read too much of what Noam Chomsky and his kind have to say.  It will only upset you.  We now return you to your government’s bullshit, already in progress.
Posted by Unknown at 11:29 PM